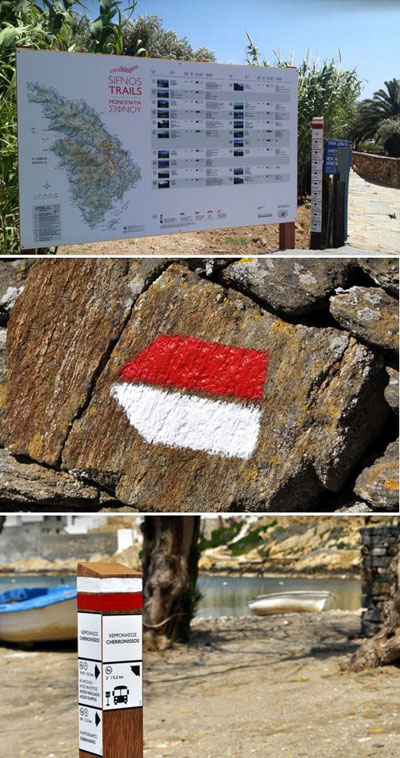 Roadways of the past, still serving the needs of the island and its people, the paths of Sifnos create a unique network of approximately 200 kilometres. Some are paved with stones, and others are dirt tracks. However they are, they do not cease to be material proof that man can intervene on and still have respect for the natural environment, aiming not only to cover people’s vital needs, but also act to protect the environment (such as with dry stone walls). On the other hand, the paths are a challenge to the future, since they can contribute even more to showcasing Sifnos as a destination for tourism and culture, with mild interventions.

An ever-present element of Sifnian tradition, the paths serve farming and animal farming life – even in places where there exists an alternate access route – since they are used on a daily basis so that people and animals can reach pastures and thimonies (simple one-roomed constructions covering the basic needs of the farmers).

They are also of interest to wanderers on foot, who can enjoy the beautiful vistas of an “other”, green and fragrant Sifnos, during the autumn and especially spring seasons, where they can gather herbs, greens and wild flowers which grow freely everywhere, or reach secluded beaches and relax in the clear, blue sea.

During their walks, visitors can get to know small, white churches, or more imposing monasteries, that are still completely harmonious with their natural environment. It is certain that they shall be enchanted by their beauty, and impressed by the deep religious beliefs of those who chose, despite the lack of means of their times, to express their faith at these places, despite the effort required.

There are also “monuments” of popular culture around to discover, such as wells, springs, pigeon houses, themonies (simple one-roomed constructions covering the basic needs of the farmers), ancient towers (beacons), mines, threshing fields, lime-burner kilns, and thousands of meters of dry stone walls.

Some of the paths of Sifnos are mentioned as examples here:

During the last few years, the local community, understanding more and more the need to salvage and protect these paths, has made a coordinated effort to clear, mark and chart them. This effort is supported by the Periphery of the Northern Aegean (continuing the work commenced by Prefecture of East Cyclades), the Municipality of Sifnos, the Greek Association for the Environment and Culture, Beautification and Commercial Associations from the island, and many volunteers.

Sifnos is an ideal place for trekking/hiking especially in spring and early summer, April, May, June and in autumn, September, October and November. Get a map of the paths from the island’s stores and start exploring the island or if you need contact with a guide… 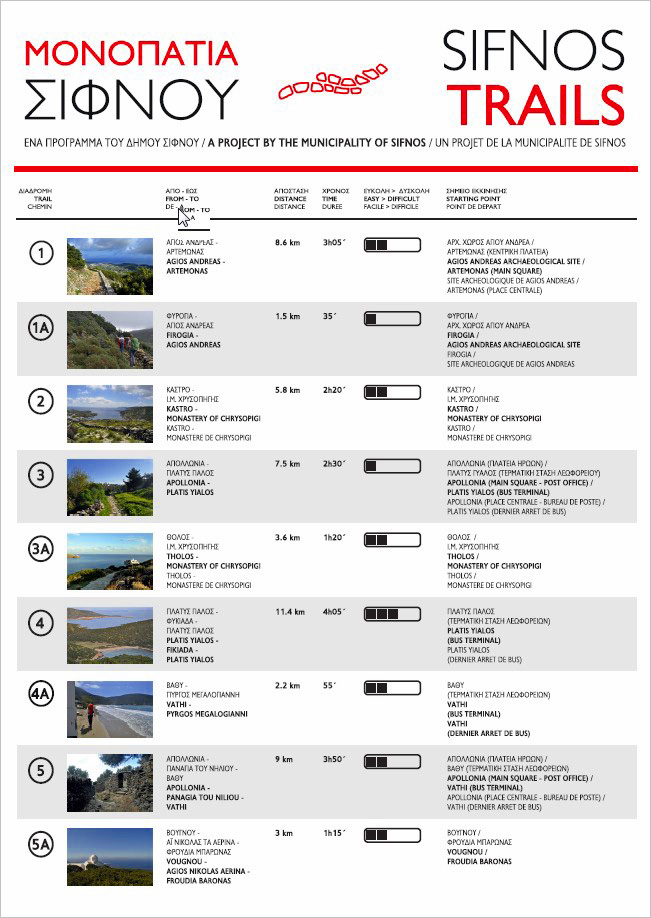